While working on the Rundāle Palace Museum’s collection of 18th century lace, which contains complex and fine samples of needle and bobbin lace, one cannot help but wonder – what were the origins of lace? During the past three years, the collection has been supplemented with several samples of early lace works that are displayed in the Renaissance room of the decorative art exhibition. Three samples of buratto lace strips stand out from among the samples of 16th and early 17th century drawn thread, pulled thread and cutwork embroidery on fabric and net.

Buratto is a specifically woven cloth with a crisscrossed double warp that reinforces equally sized net eyelets and forms canvas. Originally this cloth was made for practical purposes – to sift cheese. It was coarse and woven from thick linen or hemp threads. Its name derives from the Latin word bura meaning ‘coarse fabric’. Set width strips of fabric for embroidery were woven from a finer linen thread. Embroidery was completed with linen or coloured silk threads using darning stitch and linen stitch. A rare sample of buratto lace strip mentioned in the books about lace history is the bonnet of Charles V, Holy Roman Emperor. 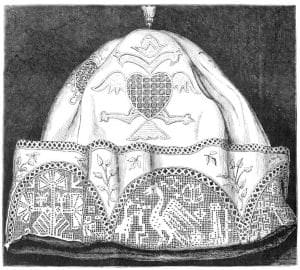 Usually this type of embroidery was used in table cloths, altar cloths and bed linen – sheets and pillow cases. The tradition to adorn bed linen with lace remained popular until the 1960s.

An insight into the world of early lace is afforded by Alessandro Paganini’s book ‘II Buratto’ that depicts not only the process of embroidery but also the weaving of Buratto cloth. Some pages in this book have a varying size net eyelet background to allow readers to draw a specific embroidery pattern. The first part of the book consists of easier plant and bird motifs, while the rest depicts more elaborate compositions with fantastical animal, bird and mythological character motifs worked into ornament. The first edition of this book was published in 1518. 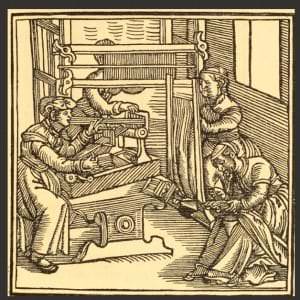 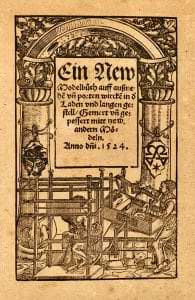 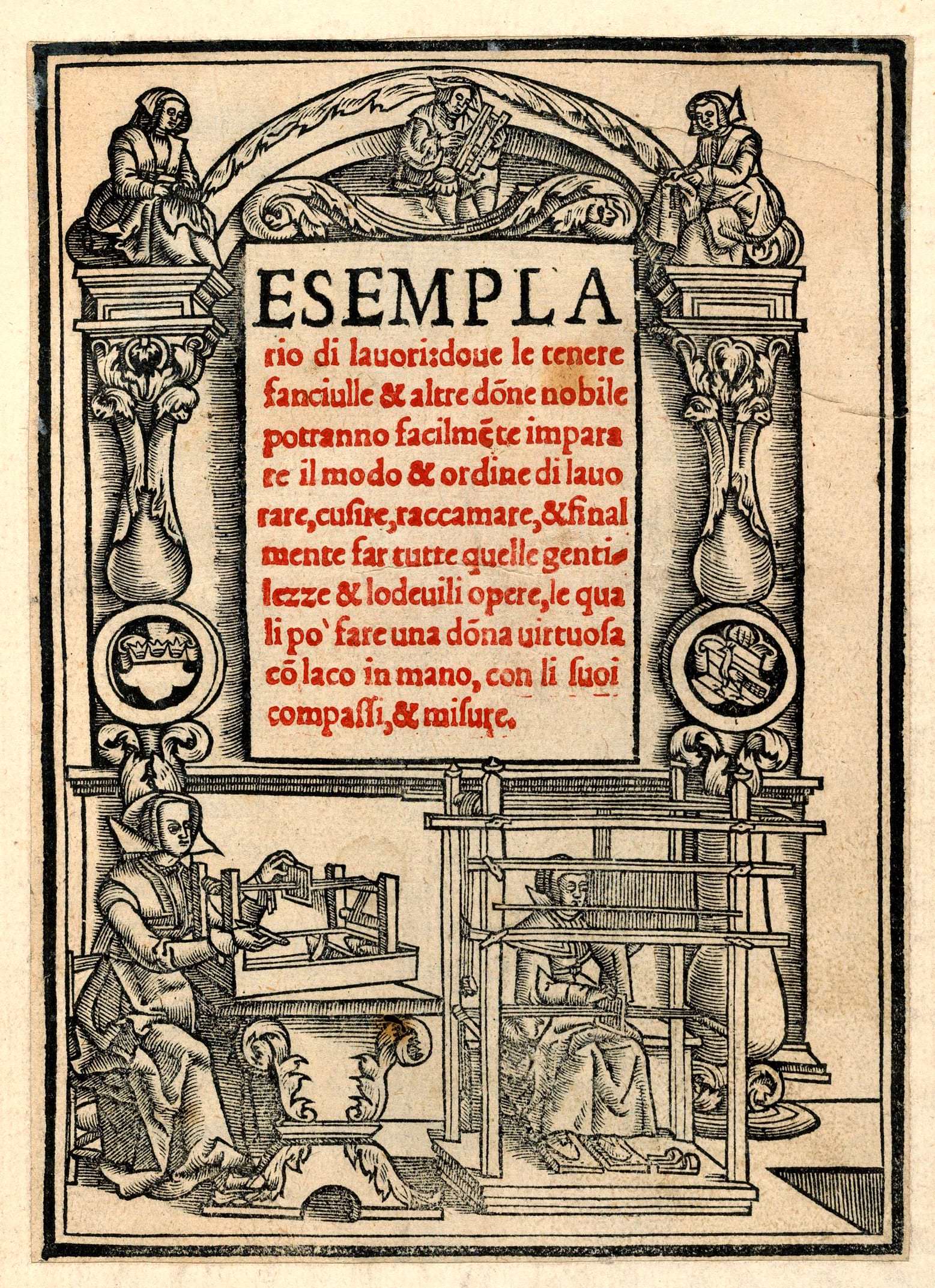 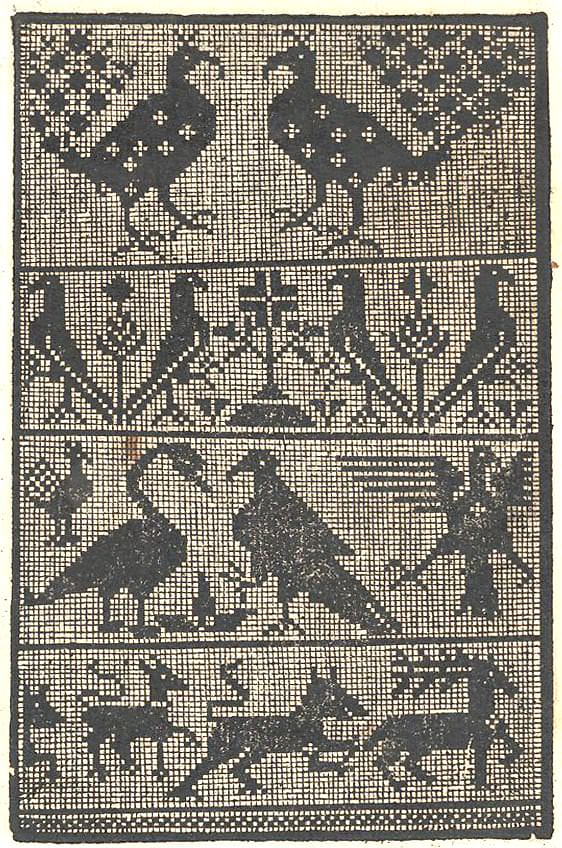 Samples of Buratto lace in the collection Rundāle Palace Museum 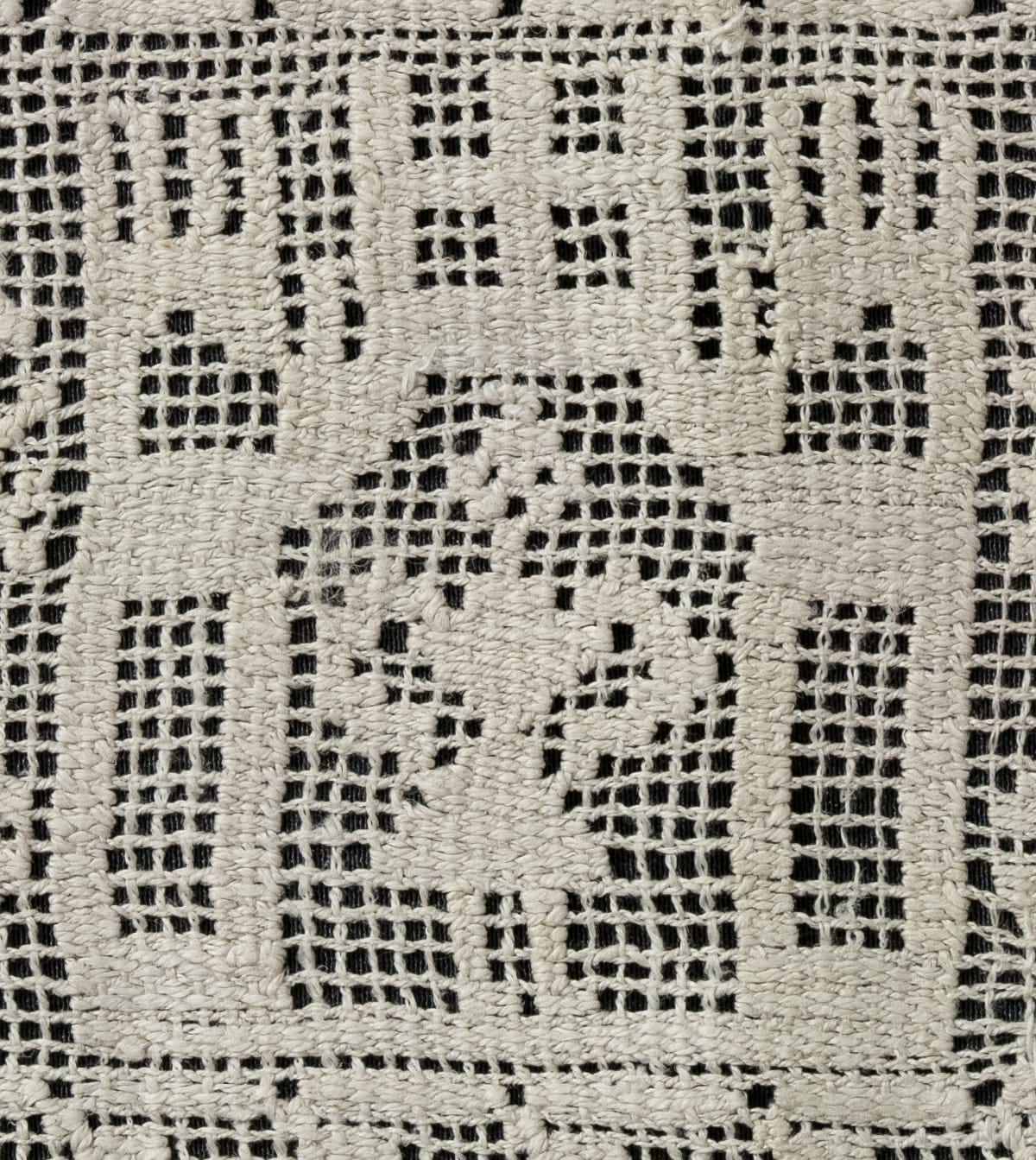 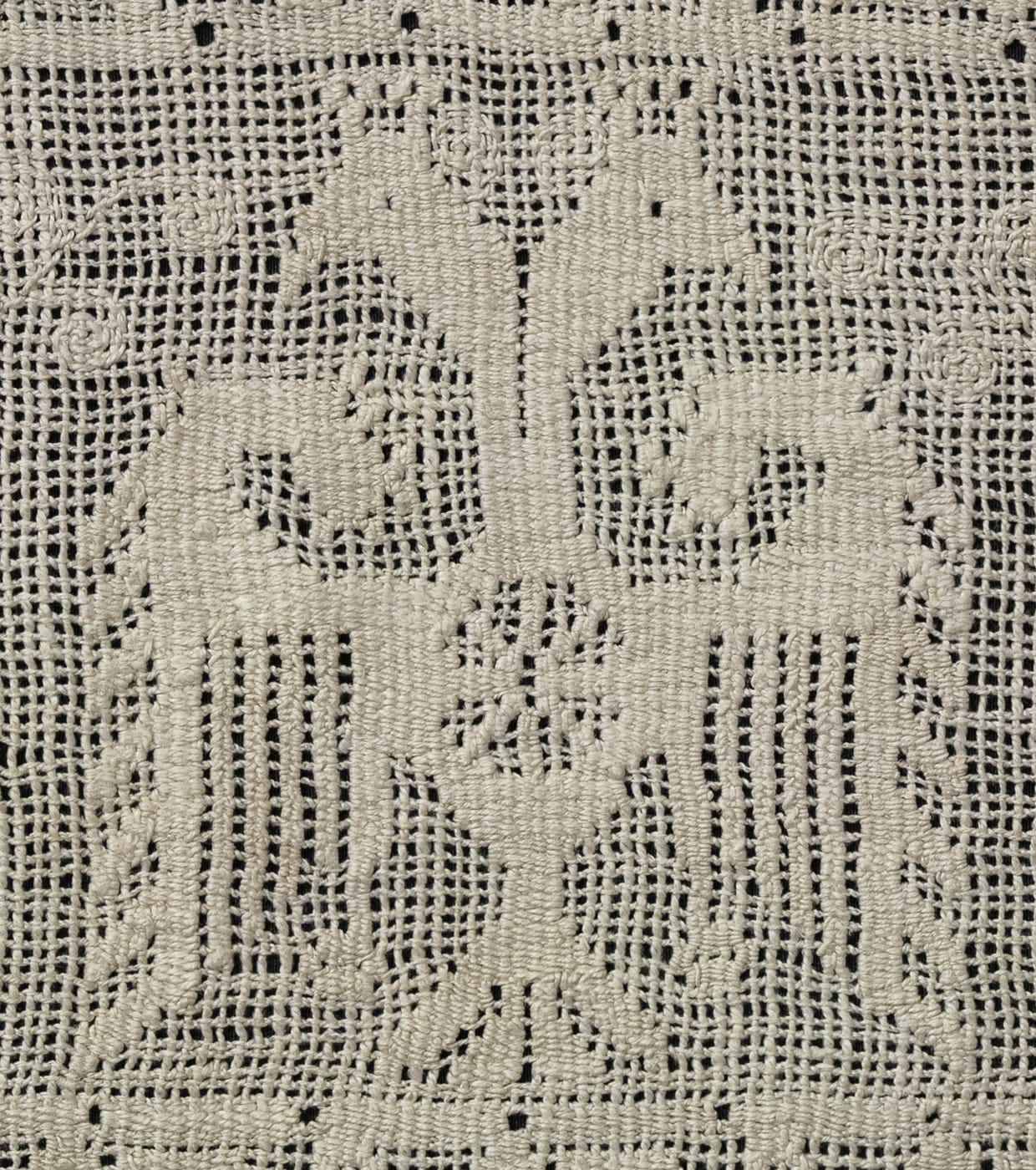 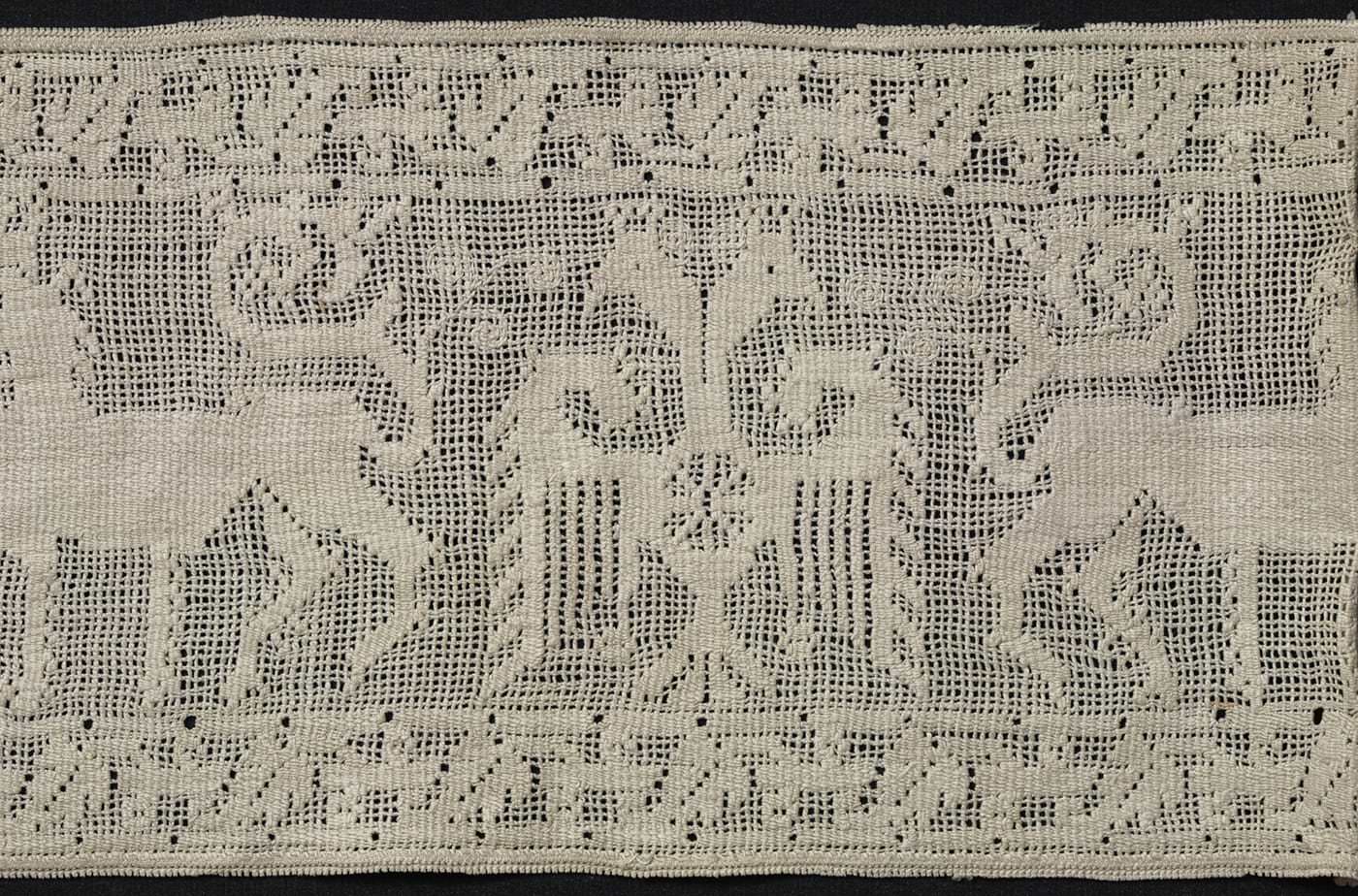 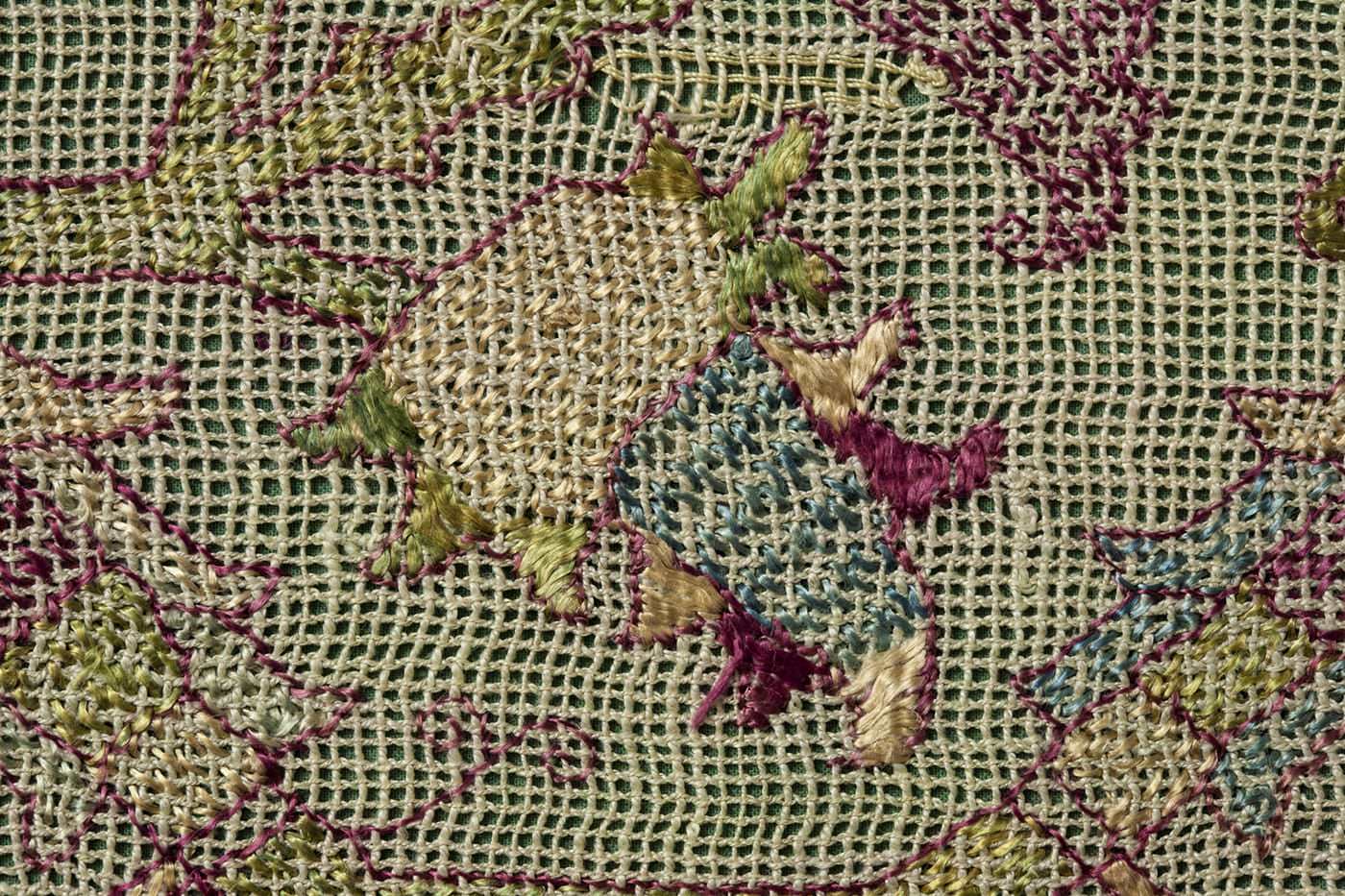 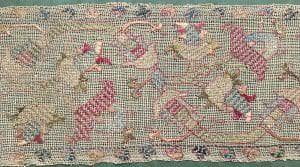 Buratto technique originated in Italy, mainly Sicily and Sardinia, in the 16th century. Embroidered Buratto lace was also imitated in the 19th century but in the early 20th century buratto weaving practice was revived by Virginia Nathan and Clara Onori in Antella, Tuscany. Nowadays Fondazione Arte della Seta Lisio is still in operation. The Foundation commissioned special looms to be designed that would allow for non-traditional crisscrossing of warp threads needed to make Buratto cloth. The Foundation was established by Giuseppe Lisio in Florence in 1906 with the primary aim to revive hand-weaving of historical brocade and velvet.

Written by: Lauma Lancmane
Exhibition Curator and Chief Specialist in the Art Research Department at RPM

To view the process of weaving a Buratto strip please click here.